The Seahorse of the Bahamas

The Seahorse of the Bahamas 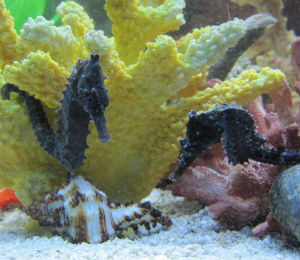 Snorkeling tours are one of most visitors’ favorite things to do in the Bahamas, offering incomparable opportunities to view spectacular underwater scenery and meet some amazing denizens of the deep. One of the most fascinating of these creatures is the intriguing seahorse, the only species on earth where the male bears the unborn offspring.

Seahorses are upright-swimming relatives of the pipefish ranging in size from just half an inch to around 14 inches. Their body shape makes them poor swimmers, propelling themselves with a small fin on their back. Steering is provided by tiny pectoral fins near the back of the head.

Around 32 seahorse species have been discovered, though several species are in danger of extinction due to coastal habitat depletion, harvesting (for Asian traditional medicines) and pollution. Lacking scales like most fish, the seahorse’s bone structure is comprised of little plates covered with a thin layer of skin. Coloration varies according to the specific species and the area it inhabits.

Seahorses’ main claim to fame in the animal world is the fact that the male of the species carries the eggs before they hatch. Monogamous creatures, sea horses mate for life. The female seahorse lays anywhere between eight and 600 eggs into the male’s brood pouch, where the male fertilizes them internally. The eggs will remain in the pouch until emerging fully formed about three weeks later. Baby seahorses are known as fry and are completely on their own from birth. The seahorse’s life span is two to six years and they generally live in groups, or herds , of about 250.

Plankton, algae, brine shrimp and small crustaceans comprise most of the omnivorous seahorse’s diet. Their elongated snout enables them to suck in their tiny prey, and they graze continually. Incredibly, one little seahorse can eat more than 3,000 brine shrimp a day, necessary because the little animal has no teeth and no stomach, causing food to pass through their digestive system quickly. Basically, they need to eat constantly to stay alive.

Seahorses have keen eyesight and their eyes, located on either side of the head, can work independently, meaning they can look forwards and backwards at the same time. This is particularly useful for hunting. Their long, thin snout enables them to poke around in nooks and crannies looking for food to suck up through their long, thin snout.

The seahorse is found in shallow temperate and tropical waters around the world, attaching themselves to sea grasses and corals with their prehensile tails. Because they are so tiny, the seahorse has a multitude of natural predators, including crabs, fish and rays. They are also constantly in danger from their own environment because they are easily uprooted from their clinging spot by storms, often tossed ashore to die. The seahorse may live in fresh, brackish or salt water.

Due to their coloration, seahorses are able to effectively camouflage themselves among the sea grasses and coral reefs where they live, blending with aquatic plants and larger coral in order to hide from their predators. Much of a seahorse’s time is simply spent bobbing and eating among the coral and vegetation, anchored down by its long tail.