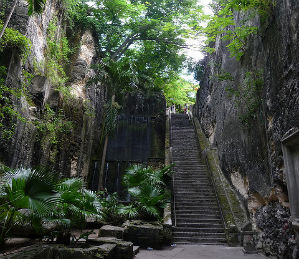 One of the most popular attractions of Nassau, Bahamas is the exceptional Queen’s Staircase. This grand staircase is about 102 feet tall, with 65 steps that was carved out of the limestone base. The steps were made by slaves, who were locals of the island at the time, that English colonist made them make sometime between 1793 and 1794, and the staircase was named after the Queen Victoria herself. This area is full of overgrown, and lush vegetation, overgrowing with a waterfall flowing from the top, giving that jungle feel and look to it. It is a unique place to see in Nassau, and it is clear why it is such a popular tourist destination.

The Queen’s Staircase also provides access to St. Andrew’s Kirk, the Straw Market, Gregory Arch, a tunnel that cuts straight through a hill in 1850, the Government House, Prospect Ridge , the Vendue House, the Christ Church Cathedral, and the old Graycliff Hotel. The Queen’s Staircase is a great starting point for visitors of Nassau, because it leads to some many other great stopping point. The Queen’s Staircase is also free admission for everyone, but there are many walking tours available to have a guide teach the more in depth history of the staircase. It may be smarter to see the Staircase and local historic sites with a guided tour, because it can save you time on a Bahamas vacation while getting to see all the sites and absorb all the information and history of the sites.

The best way to see The Queen’s Staircase and then be led into the other great historic sites of Nassau, visitors are best off by starting in New Providence, more specifically, in Rawson Square. Visitors will get the delight of starting in the old town, and get an idea of what Bahamas history is all about. The Queen’s Staircase provides amazing photo opportunities, so be sure to remember a camera before the hike. Be prepared, if visiting on a weekend, that since this is such a popular site in Nassau to visit, is free admission to everyone, and a great photo opp, that this attractions is normally a bit crowded on the weekend, and the only way around that is to take the trek during the week.

This is a wonderful way to relax as well as explore, and is one of the many things to do in Nassau Bahamas.