The Pirate Museum of Nassau Bahamas

The Pirate Museum of Nassau Bahamas 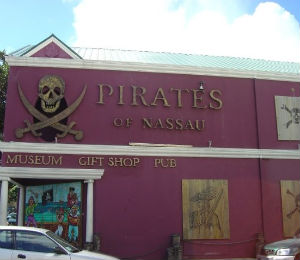 The Pirate Museum of Nassau Bahamas is a great place to visit for history buffs, kids that love pirate stories, or anyone who loves the idea of finding treasure. This popular museum has been voted a favorite among both tourists and locals alike. Located near the port for cruise ships, the museum is as easy to get to as it can get.

Imagine standing outside a nearby tavern, overlooking the harbour from a dock with the salty breeze hitting your senses, and everything is lit up by the moon and the stars over the island and sea. In the distance, you see ships are approaching. It’s an eerie and calming sight to imagine, but visitors will get to experience this at the Pirate Museum of Nassau Bahamas. A treat of the tour is that visitors will get to board a replica of the pirate ship named, “Revenge”, and see inside the world of late 1600’s and early 1700’s pirates.

These were the original Pirates of the Caribbean, and their Golden Age lasted for thirty years from 1690-1720. Nassau was smack dab in the middle of the action, and attacked hundreds of merchant ships, ransacking tons of gold in weight, and plenty of jewels. Nassau provided the perfect habitat for pirates with waters too shallow for large man-o-wars but deep enough for the pirate’s favorite type of vessels to use, sleek and fast boats. Nassau was such a favorite amongst the most notorious pirates, that it is said that when they went to sleep at night, they dreamt of going to their beloved port of Nassau on New Providence Island instead of to a heavenly escape.

The gold and goods that were ransacked from the merchants ships gave produced the base of a growing and lucrative economy of the islands. When word got out that this was happening at Nassau, a booming community happened, attracting hundreds of merchants, rogues, robbers, and wild women.

The Pirate Museum of Nassau Bahamas now has an interactive section of the museum, which is fun for all ages. Open 7 days a week, but only 9 a.m. - 12 p.m. on Sundays. There are plenty of things to do in Nassau Bahamas, as well as places to see!