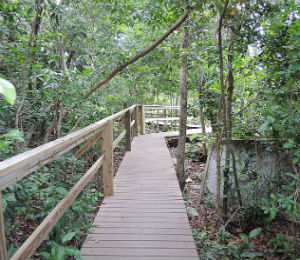 Establish in 1977, this national park is the only park where visitors can see all six ecosystems of Grand Bahama Island in one place. The Lucayan National Park is large park, spanning over 40-acres, and has some of the best beaches on the island to see. This national park is also world-renowned for having some of the most spectacular and largest underwater cave systems in the world. The cave system stretches over six miles of caves and tunnels and more that hasn’t been explored or discovered. Two of these caves are open to the public for viewing pleasures, but it is prohibited to swim in the caves, as it is not very safe. A special permit is required for diving these caves, which can be hard to acquire from the Bahamian Government.

The Lucayan National Park has several nature trails and boardwalks that lead to a variety of ecosystem that contain every vegetative zone that is in the Bahamas, and visitors will be able to get to see all six of them in one place. These nature trails will eventually lead to the beach, which has been voted one of the best beaches on the island. The beach of the park has picnic tables for visitors to enjoy lunch, and be able to sit back and relax and enjoy the atmosphere.

The Lucayan National Park was named after it’s original inhabitants, the Lucayan Indians. Little is known about the Lucayan Indian, except that Christopher Columbus came across them on his voyage to the new land. In his writings, he described them as attractive, and kind people. The population of the Lucayans were said to have originated for the Taino tribes, and migrated up through the Caribbean from South America, such as Brazil. Their population was spread out across the Bahamas, until the entire population was captured and sold into slavery, ultimately leading to their extinction.