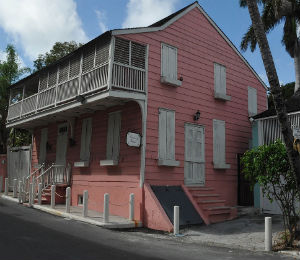 Visitors of the Bahamas who love to scour the historic sites of the islands are in for a special treat when coming across one of the most recognizable buildings on the island of Nassau Bahamas. The Balcony House in Nassau is a bright pink home with a large balcony that cannot be missed that overlooks Market Street. This beautiful, colonial style house has everything the history buff within us all would want to see.

This free standing structure is the architectural gem of Nassau, and is highly cherished by Bahamian locals. This house is thought to be over 220 years old, with a colonial style from the Loyalist era. It is the oldest standing residence on the island, and is most known for it’s feature of the balcony, which is supported partially by wooden joints. Inside the home, there is a unique staircase that has been the first of it’s known kind to be mahogany wood completely salvaged from a ship. The home also has a kitchen made of stone that sits toward the back.

The home has been dated back all the way to about 1788, because of a map of Nassau indicates a site on the map in that year. The home was once home to the first person of color, who was elected in government, in the mid 1800s. The Balcony House was also once owned by Josephine Bryce. Mrs. Bryce was an American heiress who bought the home to be her in-town cottage from the years 1930’s - 1980’s, and furnished it with antiques and heirlooms from around the world, where many of it is still to this day.

The Balcony House has acquired by the Central Bank of The Bahamas in 1985, and had it’s structure restored. In 1994, after a lot of restoration to the property was done, the Central Bank of the Bahamas partnered with the Department of National Archives, the house was officially opened as the Balcony House Museum. The restoration crew kept most of the original structure intact, with the foundation being made of concrete.

The Balcony House Museum is open Mondays thru Wednesdays and Fridays from 9:30 a.m. to 4:30 p.m. and from 9:00 a.m. to 1:00 p.m. on Thursdays. There is no admission to visit, but there is donations accepted to kept the museum running. The museum is not open during the weekends or holidays.