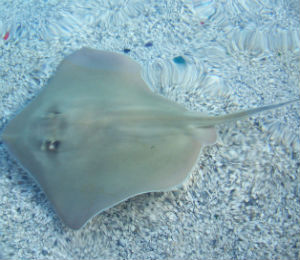 Massive, majestic and graceful, stingrays are among the awe-inspiring marine creatures you may encounter on a Bahamas snorkeling expedition. Although they are close relatives to sharks, these placid giants are generally peaceful and friendly.

Currently classified as a threatened species, stingrays’ most distinctive features are a flattened body shape and long tail. The coloration of the stingray’s broad body usually reflects the colors of the seafloor in its habitat, providing camouflage from its natural predators, mainly sharks and larger rays. Flattened bodies consist of broad pectoral fins joined to a head and trunk along with a lethal-looking tail.

Weighing up to nearly 800 pounds and stretching to lengths over six feet, the stingray is indeed an awe-inspiring sight to snorkelers and divers. Stingrays swim with a graceful wavelike motion, undulating their bodies or flapping their sides like wings. Though the stingray’s tail may be used to steer through the water, its main purpose is protection. Average lifespan in the wild is 15 to 25 years.

The infamous stingray barb, or spine, may feature a sharp point and serrated edges, and two venom glands on its underside produce a deadly poison. The size of the barb is generally related to the size of the ray itself, and is attached to the end of a long, flexible and very agile tail. Potentially deadly to humans, the stingray’s venom can remain deadly even after the creature’s death. A few members of the species, including manta and porcupine rays, have no stingers.

The carnivorous sting ray dines mostly on small fish, marine worms, crustaceans and mollusks, including snails, clams and shrimp . Lacking an acute sense of sight, stingrays hunt with the aid of electrical sensors called ampullae of Lorenzini, located around the mouth, which sense the electrical charges of nearby prey. Jaw teeth allow many ray species to crush the shells of mollusks like oysters, mussels and clams, while other species have only sucking mouthparts.

Their favorite feeding grounds are coral reefs, which they sometimes share with sharks at high tide. A solitary hunter, a stingray will settle on the bottom, half-hidden by sand, as it feeds. This ability to hide in the sand, showing only its eyes and tail, not only facilitates hunting for prey but also protects the stingray from its own natural predators.

These massive cartilaginous fish are found in tropical and subtropical seas around the world, mainly along coastal waterways. Mostly inactive, they can be spotted half-buried in sand, only the slight movement of their tail giving away their well-camouflaged hiding place.

The various species may be found in seas and rivers from shallow sandbars to rivers and deep oceans. Tending to favor deeper waters, they will retreat even further into the ocean’s depths as the weather cools. You can find them in shallow beach waters, sea grass beds, lagoons and reefs. Some members of the species, including river sting rays and some whiptail stingrays, live only in fresh water.

Stingrays’ natural predators are few, due to their massive size. Predators include sharks, sea lions, seals and various large species of carnivorous fish.