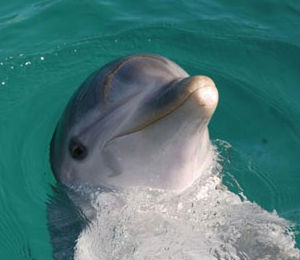 Playful, intelligent and engaging, Atlantic bottlenose dolphins are among the captivating marine creatures you’ll meet on a Bahamas snorkeling adventure. One of the many exciting things to do in Nassau Bahamas, snorkeling allows visitors to get up close and personal to a myriad of fascinating inhabitants of the deep, including this perpetually “smiling” marine mammal.

Often seen leaping playfully alongside boats, the bottlenose has a curving element to its face, making it appear to be smiling, a characteristic especially appealing to humans. Thought to be one of the more intelligent species of the animal world, Atlantic bottlenose dolphins relate well to humans and have been trained to do amazing advanced tasks ranging from locating sea mines to helping fisherman by driving fish towards nets.

Light to dark gray in color and growing to a length between 10 to 14 feet long, bottlenose dolphins can weigh up to 1,100 pounds. Closely related to whales and porpoises, their overall size can depend on their location, with those living in cooler waters tending to be larger than warm water dwellers. Thanks to their sleek, streamlined bodies, bottlenose dolphins are swift and graceful swimmers. Dolphins have smooth skin that feels like rubber to the touch and their outer layer of skin may be up to 10 or 20 times thicker than that of land animals. Old skin cells constantly fall off and are replaced by new cells, keeping the bottlenose’s skin consistently smooth and resistance-free.

The Atlantic bottlenose has a short beak and pointed flippers, and its underbelly may be pink or white. Eyes are located on the sides of the head near the corners of the mouth, and you have to look very carefully to spot the dolphin’s tiny ears, located right behind the eyes.

Bottlenoses are often spotted breaching as high as 16 feet into the air, splashing back down in the water. Highly sociable, they live in groups called pods and may even have subgroups within the larger group. Though a pod typically ranges from 10 to 100 members, they have been observed in groups of up to 2,000 in the wild.

Dolphins’ favorite foods are fish, shrimp and squid. Like many other dolphins, bottlenoses sometimes work as a team to round up schools of fish, and may use a strategy called fish whacking where they stun prey with their flukes. Consuming from 10 to 35 pounds of seafood daily, dolphins hold prey with their teeth but do not chew their food. Like other members of the dolphin family, bottlenoses use a system called echolocation to locate food.

Atlantic bottlenose dolphins can be found in warm harbors, bays and even rivers around the world, tending to live in waters where temperatures range from 50 to 90 degrees Fahrenheit. Though they are able to live in cooler seas, they are unable to survive in polar waters.

The bottlenose may live deep in the water, coming up for air every few minutes, though when living close to shore they can get air almost continuously. Some have been seen remaining under water for over four minutes.