Sea Turtles of the Bahamas

Sea Turtles of the Bahamas 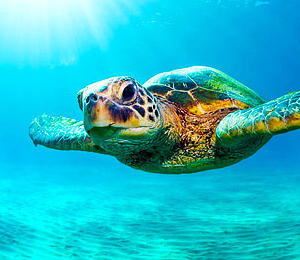 Sea turtles are one marine animal that snorkelers may get lucky enough to see on their Freeport snorkeling adventure. This endangered species, if spotted, can easily become the highlight of any diving trip. Five of the seven sea turtle species can be found in the waters off Freeport, with Australian flatbacks and the highly endangered kemp's ridley being the exceptions.

Each of the five species of turtle that can be found when snorkeling or diving near Freeport has its own distinct physical characteristics. Leatherbacks are the largest and, as their name suggests, they do not have a hard shell. They are usually about 5 feet long and 400 pounds, though they can be up to twice that size. The Guinness Book of World Records clocks them as the fastest aquatic reptile in the world. The green sea turtle is more herbivorous than its cousins and has a short, unhooked beak, though it is also quite large. Loggerheads are much smaller, usually around 3 feet long, though they have a slightly larger head. The hawksbill turtle has a more distinct beak, leading to its name, and has claws on its front fins. The olive ridley is smaller, usually less than 2 feet, though it also has claws.

Sea turtles all share the trait of not being able to retreat into their shell, which is one thing that differentiates them from turtles who live on land. They also have two large front paddles that they use to swim. They all have beak-like mouths and can live for decades. Their greatest predators are larger sharks and people.

Sea turtles like to live in relatively warm water and can be found near reefs, wetlands, and in seagrass beds. Though they spend almost their entire lives in the ocean and can travel enormous distances, the females do lay their eggs on land and therefore all baby sea turtles are born there. Amazingly, female sea turtles not only lay their eggs on land, they actually return to the exact beach they themselves were born to do so. Female turtles will dig a hole to bury their up to 100 eggs, and the temperature of the sand will determine whether the emerging baby turtle is male or female. Warmer sands result in female turtles, and colder sands result in males. After a short gestation period of 6-10 weeks, the eggs hatch, but it can take the baby turtles up to a week to dig their way out of the hole. Mating season is generally around March to October, though it can vary by species.

Sea turtles generally eat quite a range of different food. They like to munch on seagrass and other plants, such as seaweed and algae. Most of the species also eat animals such as jellyfish and mollusks. As reptiles, they do need to pause in their grazing to breath oxygen, and will generally surface every few minutes to do so. It is possible for them to stay underwater for hours at times however.

These ancient animals were around during the time of the dinosaurs, so it is important for humans to do their part in keeping them around for the centuries to come. Most of the species are endangered. This means it is illegal to buy or sell them, or to really bother them in any way. Certain species have started to slowly rebound, but threats to their environment still threaten these majestic creatures. However, that makes sightings of these creatures by snorkelers even more special.