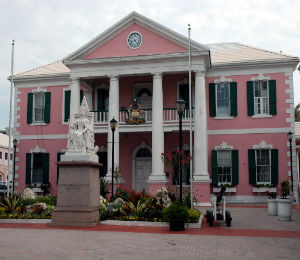 The Bahamas was once territory of England, and still uses their government practices today. This is very present in the architecture of the House of Parliament and Parliament Square for the parliament of Commonwealth of the Bahamas in Nassau, the capital of the island country. This is one of the oldest structures on the island, and has a colonial feel to it, with the addition with a Caribbean flair of a flamingo pink paint.

The parliament’s functions and procedures are all based off of the Westminster system, which is a democratic parliamentary system that consists of the Queen (or in the Bahamas case, the Governor General), the Senate, and House of Assembly. It is at the House of Parliament and Parliament Square that big decisions for the Bahamas as a country is made ever since the Bahamas became their own self-government and gained independence from the crown in 1964.

The buildings of Parliament Square were constructed in 1815 by Loyalists to the British Crown that took refuge on the islands of the Bahamas. The architecture is a great example of colonial style architecture. The pink building to the right is the where parliamentary meet, called the House of Assembly. The Senate has meetings in the upstairs of the center building, where the statue of Queen Victoria sits in front of. Toward the back of the Senate buildings is where the Supreme Court resides since 1921.

Visitors of Nassau should make a trip out to see it, and the best part of visiting the Parliament Square is that it is one of the few free things to do in the Bahamas. Come see all the Judges and Lawyers adorned in their traditional British wigs and robes as the have their quarterly sessions for the Bahamas Superior Court, and learn how the Bahamas’ government works in action.

Located in downtown Nassau, these historic pink buildings are hard to miss. For more info on the buildings, contact the Ministry of Tourism by calling (242) 302-2000, or e-mail tourism@bahamas.com.