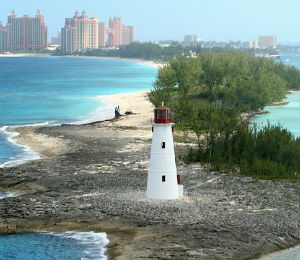 Vacationing in Nassau Bahamas is already a really exciting place to go, but then to see the beautiful lighthouse, that sits at the tip of Paradise Island, up close and personal is the real treat. The romantic spot of Paradise Island is the home to the oldest lighthouse of all the Bahamas, and experts think, even maybe the entire West Indies.

The Hog Island Lighthouse is located on the Western end of Paradise Island, and is usually the first thing travellers will see upon arriving via cruise ship. The Hog Island Lighthouse is an all white lighthouse with a red top, that stands about the same size of a football field tall. The light it shines out to ships is usually white, but changes occasionally to warn when conditions are dangerous for entry.

After Hog Island was bought by A&P heir, Huntington Hartford, after seeing it in 1959. He imagined it to be a playground for the rich and famous, and developed the island by hiring the Palm Beach architect, John Volk. John Volk and Hartford built Cafe Martinique, Ocean Club, the Golf Course, and Hurricane Hole, which are all famous landmarks today. Hartford renamed Hog Island to Paradise Island in order to attract more tourists and have it sound more elegant. Hartford was successful, in that, Paradise Island became a popular tourist destination from then on. When he opened it up to the public in 1962, it was covered by Time and Newsweek magazines.

Hartford did not destroy the Paradise Island lighthouse, and historians are very thankful for that. It is still in use every day and night, and is an important staple in guiding in cruise ships safely through to the port. Today, it is a great photo opp, and plenty of visitors have taken photos of the lighthouse from the cruise ships, but you can also see the light house from land as well for another great photo option. Atlantis is located on the east end of Paradise Island, and the Paradise Island Lighthouse is on the west end, on basically the tip of the island.

Anyone who is planning on visiting the Bahamas, there are tons of things to see and the are plenty of things to do in Nassau Bahamas, and we love sharing are rich history and culture with everyone!