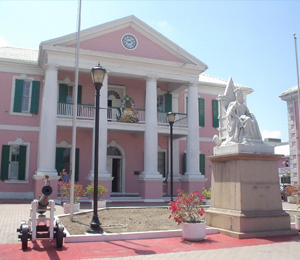 In the warm, life-giving waters of the Caribbean, the Bahamas a collection of over 700 islands and 2,400 cays-has developed into an amazing island paradise capable of supporting thousands of marine species, birds, and other organisms. The special conditions that made this dynamic chain of islands possible also increased its attractiveness to Pre-Columbian peoples, colonial settlers, and brazen pirates. As the capital of the Bahamas, Nassau fully embodies the past, present, and future of this incredible tropical paradise.

The first people to make their home around Nassau were the Arawak Indians, also called Lucayans, who migrated from South America and established themselves as adept fishermen in the abundant waters of the islands. Christopher Columbus arrived in what was to become The Bahamas in 1492 and quickly introduced the Spanish and other Europeans to the vital shipping lanes that connect ports in Central and South America to the Atlantic Ocean. The primary city of New Providence Island was first founded as Charles Town in 1666 and later, in 1695, renamed Nassau in honor of King William III of Orange-Nassau.

Throughout the 17th and 18th centuries, Nassau and New Providence Island witnessed occupation by the Spanish, British, and lawless pirates who sought to control the important waterways that brought gold and other goods from the Americas to Europe. Nassau's infamous pirates, including Blackbeard, Mary Read, and Calico Jack Rackham, set up a pirate republic and worked to intercept passing ships by luring them with lanterns placed in dangerous shallow waters and rocky reefs. Even while the British crown attempted to keep order, New Providence Island became a refuge for vagabonds, runaway slaves, and rebels. The arrival of Woodes Rogers in 1718 helped calm the pirate activity but did not end the defiant nature of Bahamians. Many locals helped smuggle guns into the Confederacy during the America Civil War, and Bahamian rumrunners facilitated the black-market booze trade during U.S. Prohibition. The Bahamas obtained its independence from Britain in 1973, but the chain of island still belongs to the British Commonwealth.

With the influx of global banks and investment firms, Nassau has been the seat of a dramatic rise in the economy and tourist industry of the Bahamas. The capital now boasts some of the world's most exclusive resorts and hotels, including the famous Atlantis complex that sits atop the lovely white beaches of Paradise Island. Nassau's cosmopolitan appeal and its location in breathtaking tropical environs are sure to continue enticing visitors from around the world for years to come.