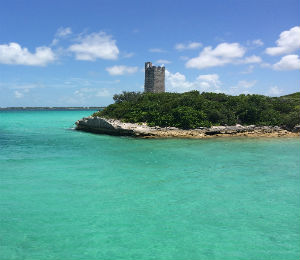 During the 18th century, Blue Lagoon Island was known primarily as a resting stop for ships waiting to enter Nassau Harbour. Merchant ships, privateers, and pirates would harvest the salt from the island’s lagoon to help preserve their food supplies as they waited. The abundant amount of salt led to the island’s legal name of Salt Cay.

In 1875, Salt Cay was bought from Britain by Charles King-Harmon for only 35 pounds. Charles would own the island for 11 years. He was later knighted and appointed various administrative roles throughout the British Empire, including acting as the governor of Cyprus from 1904-1911. In 1886, Sir Charles sold the island to Sir Augustus John Adderley, author of “The Fisheries of the Bahamas”, for 105 pounds. Two Americans bought the island from Adderley for 145 pounds. They wished to farm the land and harvest a plentiful vegetable crop. This venture failed, however, and they were forced to sell the island in 1902 for a 10 pound loss.

The new owner was Abraham Van Winkle. Van Winkle hired hundreds of laborers for the task of landscaping the entire island. The salt marshes were dredged up, a new access point for the lagoon was cut, about a mile of concrete walking paths were laid, and around 5000 palm trees were planted. He then imported a wide variety of animals, including monkeys, peacocks, iguanas, parrots, pheasants, and turkeys. He then charged the public $1 per person to ride his boat and visit his private paradise.

In 1916, the Van Winkle estate sold the island to John T. McCutcheon for $17,500. McCutcheon, known as “The Dean of American Cartoonists”, was a popular Pulitzer Prize winning political cartoonist for the Chicago Tribune. He called the island Treasure Island, and it would be known as this for decades. The McCutcheon family would own the island for three generations and kept the living arrangements primitive.

During the Second World War, Blue Lagoon Island was used by the allies as training base for American and British underwater demolition squads. They would swim seven miles around the island every day, while regularly detonating explosives on the island. This lasted for about a year, during which time the explosions weakened a cliff that would later cause the small fort that rested on it to collapse.

By 1979, the McCutcheon family could no longer manage the private island and was forced to sell it. L.A. Meister, the current owner, bought Blue Lagoon Island from the family and continues to manage the location and all of its historic sites. The entrance tower, built by famed architect Howard Shaw, stands over the site of the original tower constructed by Van Winkle. Various artifacts and relics collected by John McCutcheon are housed inside the tower. Guests cottages, used to house many famous guests including Charles Lindberg and his wife, Keith Emerson, William Styron, and several European nobles, still stand today. All these sites are protected by the island’s caretakers and help preserve it's rich history.