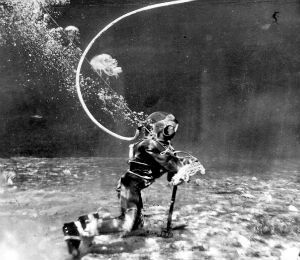 The reefs and wrecks around the Bahamas are an underwater wonderland full of brilliantly hued fish, intriguing coral formations and exotic ship wrecks. Many vacationers to this little bit of paradise count snorkeling as one of their favorite things to do in the Bahamas, in love with floating over a stunning underwater world of colorful aquatic animals and dramatic undersea landscapes. Dating back hundreds of years, the sport of snorkeling is actually thought to have begun as a practical invention for fishermen.

Scientists have found evidence of primitive snorkeling-type devices as far back as 5,000 years. The earliest “snorkelers” may have actually been the free-diving sponge farmers of the Mediterranean island of Crete, who used hollow tubes to allow them to continue breathing as they searched for sponges with their faces in the water.

Invention of the Diving Bell

Bas-relief paintings dating back to around 900 B.C. depict Assyrian divers using animal skins filled with air as an early form of diving tank, allowing them to stay submerged while exploring various dive sites. Around the year 333 B.C., legendary conqueror Alexander the Great ordered the invention of the world’s first diving bell, an enormous machine designed to capture air when lowered into the sea. Divers riding in the bell were able to inhale air without having to constantly resurface.

Diving bell technology took an important leap forward in 1538 when two Greek men put on a dramatic demonstration in Toledo, Spain’s Tagus River. Entering a large kettle with a burning candle, the inventors descended to the bottom of the river and back to the surface. To the astonishment of the watching crowds, not only were their clothes dry, but the candle was still burning!

Though the new diving bells enabled divers to make deeper excursions beneath the sea, the apparatus was unwieldy and difficult to transport. Therefore, inventors began looking for ways for divers to breathe air from above the surface, which the great thinker Aristotle compared to the way an elephant breathes through its trunk. Leonardo da Vinci was fascinating by the concept of diving beneath the sea, and his sketchbooks are full of innovative ideas for diving devices, including webbed swimming gloves and a snorkel tube attached to a completely self-contained diving suit, gear incredibly similar to that used by today’s divers.

Though the idea of a long tube extending above water seemed excellent, in actual practice it was inefficient, as the high water pressure more than one of two feet below the surface made it impossible to take a breath. Working on a more feasible way for divers to breathe air from above the surface of the ocean, British engineer John Smeaton, often considered the “father of civil engineering”, developed a pressurized air pump in 1771. This breakthrough invention allowed divers to breathe through pressurized tubes assisted by an air pump, enabling undersea explorers to venture deeper and longer beneath the sea. Smeaton’s pump eventually led to the creation of the Self-Contained Underwater Breathing Apparatus, which we now know as SCUBA.

Moving through the water presented other challenges, and inventors from Leonardo da Vinci and Giovanni Alfonso Borelli have created sketches and prototypes for fin-like footwear to help men propel themselves more quickly and easily through the sea. However, the first recorded use of this type of equipment was in 1717 when an 11-year-old boy decided to use a pair of oval paddles as sort of swim mittens. When his wrists became too tired, he switched the design for use on the feet, strapping them on like sandals. The young boy was to become one of the world’s great inventors, Benjamin Franklin, and these precursors to modern fins earned him an induction into the International Swimming Hall of Fame some 240 years later!