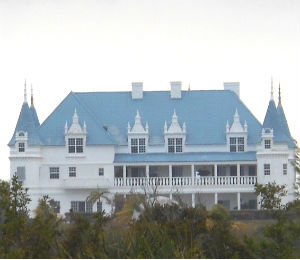 When visitors of Bahamas think of the islands, they usually imagine, white, soft, sandy beaches, bright turquoise, clear water, and a good ol’ fashioned Bahamas snorkel. The last things visitors probably expect to see is a beautiful, big castle in the islands of the Bahamas. To the visitor’s of Freeport, Grand Bahama Island surprise, there is a castle that looks straight out of a fairy tale.

Cooper’s Castle sits atop a hill, and has the perfect rags to riches story behind it. It’s the story of the life of Mr. Harvard Cooper, who when was a child only had one pair of pants to living in a castle when he grew up. He declared himself prince of Grand Bahama Island and then built the castle. The castle is located at the highest point above sea level on the island. The architectural structure is hard to miss, and sits toward the southern skyline overlooking all of Grand Bahama Island. The Coopers began building the castle in the 80’s, and Harvard Cooper claims there was no statement in having it built, other than to have something of diversity on the island.

If anyone has ever lived on the island of Grand Bahama, then they are most likely familiar with the family name of the Coopers, and are most likely even more familiar with Harvard Cooper. He became a successful businessman of the island, bringing franchises like Burger King or Kentucky Fried Chicken to the island, and can see his architectural style in the buildings of the downtown area, with curves that are not unlike the Taj Mahal’s.

The Cooper’s Castle is still occupied by the Cooper family, but tours of the castle are available, and weddings have been booked there before. Up until recently, tour buses would only allowed to drive by the castle for a glance, and left tourist feeling curious about the home. In March of 2014, the family had a mock tour to get some insight from the public to get an idea of how they thought the tour went. The family received pretty great feedback from the tour, and have decided to orchestrate a tour in the future to be available to the public.

Cooper’s Castle is a great place to go for future entrepreneurs, because if anything, Mr. Cooper has great advice to give. Mr. Cooper stands by his words when he gives his testament to future and current business men and women, stating hard work, money management, and trusting in the Lord is the key to becoming successful.