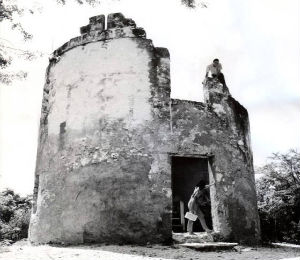 Nassau is the perfect place for any history buffs that particularly have an interest in history dealing with pirates. Nassau used to be the hub for pirates of the Caribbean back in the Golden Age, in the 1600’s- 1700’s. This Golden Age for pirates was the beginning of how pirates created a booming economy and a substantial community in Nassau. They used tactics that one can compare to the U.S. Navy Seals use. Sly, fast, and quietly attacked merchant ships that were passing through the harbor, the pirates were able to obtain the gold, as well as goods from these ships. When word spread of this lucrative and grim business, more and more pirates started sailing to Nassau to get their share.

One of these pirates was named Edward Teach “Blackbeard”, a famously notorious pirate that started as a sailor on a privateer ship before settling the island of New Providence in the Bahamas. In 1716, Teach had joined the crew of Captain Benjamin Hornigold, who had placed him in second command. The two committed numerous crimes of piracy, and Teach went on to become the famous “Blackbeard” we all know today. Blackbeard has been the inspiration for many pirate themed literary work, films and songs. Although Blackbeard used tactics to scare his victims into giving their gold and goods to him, this was as far as it got as far as history goes. Blackbird was never to have been sighted murdering or even harming his captured victims, unlike what some accounts of history has said.

Blackbeard is most famous for taking down one of his first ships, called La Concorde, a French merchant ship. He and his men claimed the ship to be theirs, gave 40 guns across his crew, and renamed the ship to the now famous, “Queen Anne’s Revenge”. Blackbeard’s career came to an end when he and his crew climbed aboard the last ship,the Adventure, and were cornered by Captain Maynard’s men. The fight ended in bloodshed, and Blackbeard was shot and stabbed multiple times to death, and then was beheaded, with his head suspended from bowsprit, to collect the reward.

There are still tales that are told of Blackbeard’s ghost, one of them being that the unexplained lights that are sea out to sea are called “Teach’s Light”, and that he roams the afterlife searching for his head. There have also been claims that Teach’s skull became the basis of a silver chalice in North Carolina, and that a local judge claimed he drank for it in the 1930’s.

Blackbeard’s Tower is one of the many cool things to do in Nassau Bahamas. Even though it has turned into a crumbling monastery, it is still a monument to the pirates of the Caribbean, who used it as a lookout tower in the 1700’s of the Pirates’ Golden Era.