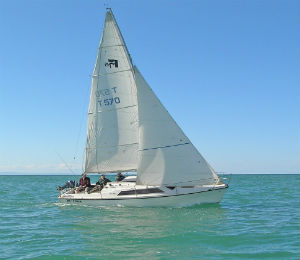 Visitors of Nassau Bahamas that plan on having a vacation in March will be delightfully surprised, not only because of the wonderful weather the Bahamas encases in this month, or the energy of the youth from Spring Break. This month is also the time for sailors from all over the world to gather here and attended the ever exciting Bacardi Rum Cup.

If there are any passionate sailors out there, then this is the event to attend. The Bacardi Rum Cup usually consists of hundreds of entries, whom are ready to compete for the prize and awards. The course and competition spans over a period of two days with a total of three races. This competition is known for having world class sailors come to the island to compete boldly for the top sailor competition. The Bacardi Rum Cup is hosted by the famous Royal Nassau Sailing Club.

During the sailing races, it is possible for visitors watching the races to rent sailboats to get an even better view of the race. For the spectators who want to stay on dry land, there will be food vendors, artwork, and live music during the event to enjoy.

For more information on the Bacardi Rum Cup dates, and the most up-to-date time and dates of the races, contact the Ministry of Tourism in Nassau by calling (242) 322-7500.