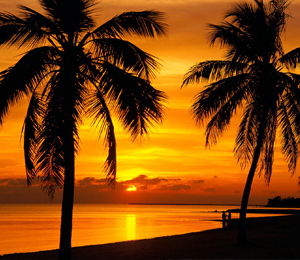 The Bahamas are full of rich and interesting history, some which even has to do with buried and lost treasure. The Bahamas also has a dark history to its past since it played such a large part in the Atlantic Slave Trade. Some experts even argue that the Bahamas was the first landing to the “New World” for Christopher Columbus in 1492, in which it is recorded that he landed on modern day San Salvador, a southern Bahamas island. Those are just a few drops in the bucket of cool facts about the history of the Bahamas. Here are few highlights on the history of the Bahamas.

Native Bahamians, Before Settlement
A branch of the Arawakan-speaking Taíno people, the Lucayans were the first inhabitants known to the Bahamas. Migrated over generations from South America up throughout different Caribbean Islands, this indigenous group arrived to Bahamas to settle around 11th century AD. History recalls the Lucayan people as being kind, and attractive looking. In a Christopher Columbus journal entry after meeting these tribes wrote that they had become great friends and that they opened their hearts to them. These tribes would be later wiped out from either smallpox exposure from Europeans or taken to Hispaniola to be sold into slavery.

Pirates and Privateers
It’s no secret that pirates ran the majority of Caribbean, and stole a lot of goods, and gold from ships passing through. The pirates from the 1600’s that trolled the waters of the Caribbean are still household names today, such as Henry Jennings and ‘Blackbeard’ Edward Teach. Blackbeard used to intimidate his victims by wearing flaming fuses in his mangled, unkempt and dirty beard. Blackbeard and Jennings made the Bahamas a pirate’s playground, fully equipped with brothels and taverns. Once the Bahamas’ first Royal Governor stepped in for under the English Crown, Bahamas got a new adage, “Pirates Expelled – Commerce Restored”.

Post-emancipation Era
After the Bahamas became an official territory under the Britain flag, the Bahamas had made slavery out-lawed, and notified other nations that if anyone were to bring their slaves onto their land, the slaves would be freed. Tensions grew between the U.S. and Britain after U.S. merchant ships that were a part of the slave trade were put into Nassau or had conveniently wrecked into their reefs. In the 1820s, many American slaves escaped from Cape Florida, and came to the Bahamas and settled mostly on Andros Island.

20th Century
The civilians of Nassau illegally supplied liquor to Americans during the Prohibition Era, while New Yorkers flocked to Nassau for the new casino. Nassau started its tourism era, and started making money off of these “sinful” activities.

In 1940, the Duke of Windsor, Edward VIII, was made to be the Governor of the Bahamas. He and his wife the Duchess visited the outer islands of Bahamas on a yacht. The Duke has been praised for his efforts to end poverty and low wages, but was said to act as if her were better than the Bahamians, and condescending toward them. He resigned in 1945.

The Bahamas became a popular tourist spot, especially for Hollywood to come film at. Famous films like James Bond, Thunderball, and The Beatles’ film Help! were partly filmed here in the 60’s.

Of course there is so much more to the Bahamas’ history, and this article only touches on certain topics. Try visiting the wondrous islands to learn more!